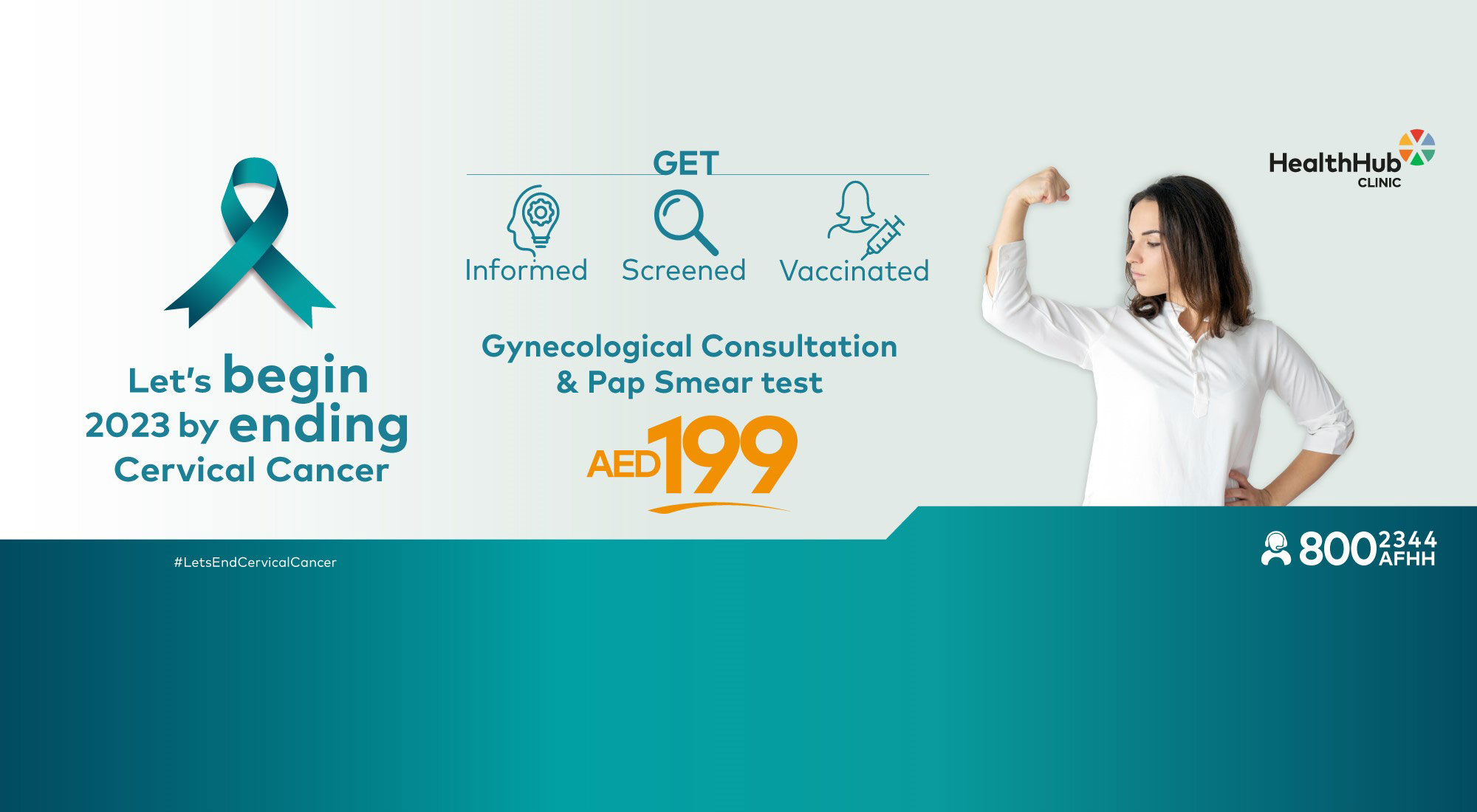 Cervical cancer is a disease where the cells of the cervix start multiplying uncontrollably and 99% of the time is cause by the Human Papilloma Virus (HPV). It is the most common cancer in women and the fourth most fatal.

Without urgent action deaths are projected to rise by 25% over the next 10 years. HealthHub Clinics will be implementing a HPV screening programme in Dubai to reduce the incidence of cervical cancer and its mortality rates. The screening programme is in response to research that suggests that, currently, 30% of cervical cancer cases in the UAE are made up by Emirati women.

What is Cervical Cancer?

Cervical cancer develops when cells in the cervix begin to grow out of control and can then invade nearby tissues or spread throughout the body.

Almost all cervical cancers are caused by HPV (human papilloma virus). HPV is a common virus that is spread through sexual intercourse. There are many different types of HPV. Some strains lead to cervical cancer. (Other strains may cause genital warts, while others do not cause any problems at all.)

A woman’s sexual habits and patterns can increase her risk for cervical cancer. Risky sexual practices include having sex at an early age, or partners who participate in high-risk sexual activities.

Worldwide, cervical cancer is the second most common cancer in women and the third leading cause of deaths.

Cervical cancer is the 2nd leading cancer and 7th cause of deaths for females in UAE. Most of the cases of cervical cancer in UAE are not detected until they are in the late stages, when it is difficult to treat.

Almost all cervical cancers are caused by human papillomavirus (HPV), a common virus that can be passed from one person to another during sex. There are many types of HPV. In addition to HPV, other things can increase your risk of cervical cancer. They include:

What is Cervical Cancer Awareness Month?

During Cervical Cancer Awareness Month, taking place throughout January, HealthHub experts are highlighting the importance of vaccination and early detection to increase the survival rate of this disease. Statistics from the International Agency for Research on Cancer and the Catalan Institute of Oncology’s Information Centre suggest that at least 1.9 million women in the UAE are at risk of developing the disease

For any medical emergencies please call 998.

Do you have any inquiries or suggestions? Let us know and we’ll get back to you.