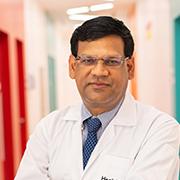 Dr. Shailesh worked as Associate Consultant in the Department of Gastroenterology and Hepatology, Singapore General Hospital from July 2014 to May 2015.He was appointed as Clinical Tutor and Clinical Lecturer in the Faculty of Medicine (YLL School of Medicine) of National University of Singapore from 2010 to 2015. He has completed one year fellowship in Advanced Interventional Endoscopy from Erasmus University MC, Rotterdam, The Netherlands. He has also training in advanced interventional endoscopy from Austria, Portugal and Germany. He is working as a Consultant Gastroenterologist, Hepatologist and Interventional Endoscopist in Thumbay University Hospital and Gulf Medical University, Ajman

He has written a book chapter on “Endoscopic Management of Pancreatic Fistula and Leaks” in the book “Diagnostic and Therapeutic Procedures in Gastroenterology- Second edition 2018 published by Springer, USA.